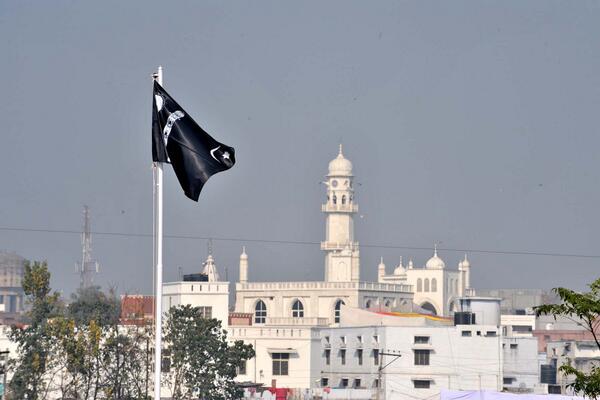 The Holy Quran (24: verse 56) aptly christens the necessity of Khilafat as an indispensable divine leadership institution that must necessarily succeed the institution of prophethood to ensure continuity of the world edification of the faithful, their global unity, peace and security, the establishment of the monotheistic worship of Allah and entrenchment of His monotheistic world order on earth. In the same vein, an authentic Muhammadan Prophetic Tradition recognizes the necessity of Khilafat as it declares that: “Prophethood [nubuwwah] is always followed by the institution of successorship [khilafat] (Kanzul Ummal, vol. 11, No. 32246, p.470).

The noble Companions of the Prophet Muhammad (saw) understood and recognized the necessity of Khilafat which was why, in the event of the demise of the Holy Prophet (saw), they saw to it that the day did not pass by before they had successfully established the institution of Khilafat on the precept of prophethood, which conferred the mantle of leadership upon Abu Bakar (ra), followed by Umar bn Khattab (ra), then Uthman bn Affan (ra) and, finally, Ali bn Abi Talib (ra).

However, the ensuing political turmoil caused by some elements that lacked the understanding of the necessity of Khilafat led to the assignation of Ali (ra) in 661 and the establishment of the monarchical dynasty of the Umayyad in Damascus from 661 to 750. This was followed by the epochs of the major dynasties of the Abbasids in Baghdad [750-1258], the Sultanates of the Mamluks in Egypt [1260-1517] and including a number of relatively regional dynasties of the Ummayads in Spain [929-1036], the Fatimids in Egypt [end 1171], the Safavids in Persia [began 1501], the Seljuks [ended 1194], the Ayyubis [began 1171] and the Mughals in India [ended 1857].

However, with the 1924 abolition of the Ottoman Caliphate in Turkey by Mustafa Kamal Ata Turk, (a dynasty that had started since the 13 century and enjoyed leadership hegemony over vast sections of the Muslim world) the mainstream Muslim world met with an appalling fate of a global body with no global head to unite their diversity, protect the sanctity of their common Islamic faith and jurisprudence and their practice, inspire their visions, steer their affairs, settle their crises and conflicts and harmonise, coordinate their global agendas and continuously put them on the pedestal of sustainable global brotherhood, peace, development and progress. As a result, the contemporary Muslim world has since been bedevilled by instances of intra and inter-state conflicts and warfare, political upheavals, intra-religious conflicts, extremism, fanaticism and terrorism all of which have rained catastrophic consequences upon the lives and lands of the Muslims.

Though, as available evidences show, there is reason to believe that the contemporary mainstream Muslims have very much realised the necessity of Khilafat. This is evident in the fact that, following the event of 1924, Muslim leaders and scholars have since been making successive efforts at re-establishing the Khilafat (unsuccessfully though) through appeals via books and articles as well as conveyance of ad-hoc conferences and establishment of movement for the re-institution of khilafat, like the Khilafat Movement established in Karachi, India in the 1940s.

Notably, Professor Hans Hung, while speaking about such khilafat conferences which he referred to as Pan-Islamic conferences, noted that, in response to the 1924 abolition of the Khilafat, “Five Pan-Islamic conferences of religious scholars followed: in Mecca (1924), Cairo (1926), Mecca (1926), Jerusalem (1931) and Geneva (1935)—all without tangible results. After the Second World War, Pan-Islamism received fresh impetus with the foundation in 1949 of the Islamic World Congress in Karachi, in 1962 of the World Muslim League in Mecca and in 1970 of the Organization of the Islamic Conference in Jeddah as an umbrella organization for Islamic governments. However, none of these organizations was able to integrate the national liberation movements in the individual Islamic countries. In 1947, after the partition of India, Pakistan became the first independent Islamic state; others followed. The Islamic movements and conferences could at best spread the idea of solidarity among Muslims and warn of the need for a common solution to economic and social problems. But to the present day, the creation of an Islamic federation remains a daydream. (Hans Hung, Islam – Past, Present and Future, 2007, One World Publications, England, p. 456-457)

Curiously, the recent notorious birth and death of the terrorist caliphate that saw Abu Bakar Al-Baghdadi enthroned by the ISIS terrorists does not only reveal an unbridled idiosyncrasy and desperation of some overzealous opportunists and a sheer attempt at misrepresenting the sanctified office of a true Khilafat before the global public, but further demonstrate the lingering failure of the mainstream Muslim public to deepen the scope of their conviction beyond their mere realization of the necessity of Khilafat in this age to their ultimate realization of the particular Khilafat that is of necessity for the contemporary time.

It is worthwhile, and, in fact, interesting to note that, while the mainstream Muslims have continued to meet with failure in their almost hundred-year-struggle to re-establish a global caliphate, the worldwide Ahmadiyya Muslim Community has, however, been divinely and seamlessly blessed with the re-institution of global Khilafat based on the footstep of prophethood, exactly, as prophesied by the Holy Prophet Muhammad (saw). This was achieved on 27th May, 1908, following the demise of the Hadhrat Mirza Ghulam Ahmad (as), the Promised Messiah and Mahdi and Holy Founder of the Community. Since then, and over a hundred years later, the world has witnessed peaceful successions of five Khulafa (Caliphs), with the present Khalifa, Hadrat Mirza Masroor Ahmad (aba) leading the reformation and peaceful spread of Islam across the world.

The self-imposing question at this juncture is: why has Ahmadiyya been able to successfully re-institute the Khilafat while the mainstream Muslim world has failed in all their attempts to achieve same? The compelling answer is that the mainstream Muslim world has only realized the necessity of Khilafat while, unfortunately, woefully failed to realize and appreciate the particular Khilafat that is of necessity!

In sum, based on Qur’ānic and Prophetic prophecies, the Khilafat that is of necessity for this age can only be such [1] a Khilafat that is established by Allah Himself for the community of the truly faithful Muslims (Quran 24:56); not that which will have to emerge as a result of ad-hoc conferences organized by any humanly founded khilafat movement, or academic articles and books written by self-styled religious scholars or terroristic force of the radical extremists and fanatics. [2] A Khilafat that can only be established on the precept of prophethood for a community of faithful believers, who have not shut the door against the emergence of the prophethood of a sort which must, of necessity, firstly come to be, and then, open the door for a Khilafat to succeed it (Musnad Ahmad bn Hambal).

Apparently, the global mainstream Muslim community that does not believe in the coming of a prophet of a sort must do away with their utopian agenda of having a Khilafat that should succeed a prophethood the coming of which their existing common belief system has put an embargo upon. The Prophet Muhammad (saw) predicted the latter-day establishment of Khilafat after prophethood. In other words, the world would witness the emergence of a prophet of a sort who would be succeeded by successors, the Khulafa. Sadly, while mainstream Muslims believe in this prediction, they, however, paradoxically believe no prophethood would be before the Khilafat. They are struggling to jump over the space of the prophet and land in the place of the successor to the prophet! That’s a paradox par excellence! And it reveals the appalling condition of their religious psychology.

The Only Two Courses of Action

For the contemporary Muslim world, the Holy Prophet (saw) had recommended two courses of action contained in the following Prophetic Tradition:

Hudhaifah bn Yaman [ra] narrated that: “The people used to ask the Messenger of Allah [saw] about good, but I used to ask him about evil lest it might overtake me. Once I said: “O Messenger of Allah! We were in ignorance and in evil and Allah bestowed upon us the present good [through you]; will there be any evil after this good?” He said: “Yes.” I asked: “Will there be good after that evil?” He said: “Yes, but it would be tainted with smoke [little evil].” I asked: “What will its smoke be?” He said: “There will be some people who will follow a method other than my tradition. You will see their actions and disapprove of them.” I said: “Will there be any evil after that good?” He said: “Yes, there will be advocates to the doors of Hell, and whoever accepts their invitation to it will be thrown in it [by them].” I said: “O Messenger of Allah! Describe those people to us.” He said: “They belong to us and speak our language.” I asked: “What do you order me to do if such a thing should take place in my life.” He said: “Adhere to the group [Jamaat] of Muslims and their leader [Imaam].” [talzim jama’ata al-muslimeena wa imaamahum] I asked: “If there is neither a group [of Muslims] nor a leader [what shall I do]?” He said: “Keep away from all those different sects, even if you had to bite [i.e eat] the root of a tree, till you meet Allah while you are still in that state.”[10] In another version of this Hadith, we have: If in these times any Khalifah of Allah is to be found, then you should obey him even if he were to cause you injury or appropriate your wealth.” [fa in kaana lillaahi ‘azza wa jalla yauma’idhin khalifatun daraba zhahraka wa akhadha maalaka fasma’ wa ‘ati’..] Mustadrak Imam Hakim, Kitab al-fitan wa al-malahim, vol. 4, p. 432-433)

The above two courses offer the contemporary Muslim world the options of either:

[1] Look around to discover and join the folk of any existing global Muslim community with one global Khalifah or Imam. But, in the event of not finding such a Khilafat, should;

[2] Withdraw from the center scenes of the global human life and move to and die in the wilderness – an option that would be extremely difficult, if not entirely impossible, in the postmodern global village of our 21st century world.

Finally, for every objective member of the contemporary mainstream Muslim world, a nice step to take in the ultimate search to discovering and joining the fold of any existing global Muslim Community with a world Khalifah would perhaps be to begin with an objective and honest study of that historical event of 27th May, 1908 that established the Khilafat of the worldwide Ahmadiyya Muslim Community. A Khilafat the over hundred years history of which has established its global presence and influence in the world and has seen the Community’s revived and peaceful teachings of Islam spread to and established in over 200 countries in the world, with millions of peaceful followers.

It is a khilafat that has established, right from the First Khalifah (ra) through the current Fifth Khalifah (atba), a long history of selfless and peaceful strive for global unity, harmony, brotherhood, peace and development of the global human family. A Khilafat which advocates and exemplifies non-violent resistance to oppression and persecution by the adversaries. A Khilafat that pursues the cause of humanity through rendering humanitarian services to people irrespective of their ethnic, racial, religious and national backgrounds. A Khilafat whose globally celebrated motto has been, and always is, Love for all; hatred for none.